A child whose design for a Northumberland Day stamp was this year to be produced as official Royal Mail postage, is still being recognised by the Northumberland Day organisers, even though their stamp will not be seen on any envelopes or postcards, as intended.

Oliver Stirk, when a Year 4 pupil at Mickley First School in Stocksfield, took part in the ‘design a stamp’ contest, which appeared in the 2018 Northumberland Day education pack.  The intention was to use the Royal Mail ‘Smilers’ service to produce stamps to Oliver’s design, after he had wowed judges with his simple but beautifully shaded and coloured drawing of Sycamore Gap.  However, out-of-the-blue and to the annoyance of many customers, Royal Mail cancelled the Smilers service that had been available for many years. 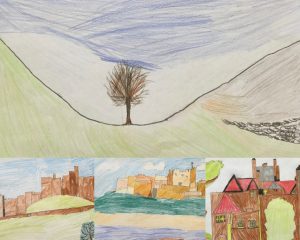 Despite this, Northumberland Day’s team are showing as many people as possible what the stamp would have looked like and rewarding Oliver with a prize of a book token.  Some former classmates will also be sent prizes for their entries, which all depicted castles.

Jane Hunt, organiser of Northumberland Day hopes to add to the appeals of those Royal Mail customers who are upset about the loss of a service that they used to create special stamps for loved ones and friends. Details of what would have been the Northumberland Day stamp for 2019 will be sent to Royal Mail HQ, with a plea to one day bring the service back so that Oliver can see his stamp brought to life, as legal postal tender.

Organiser Jane Hunt says: “Mickley First School pupils put great effort into designing possible stamps for Northumberland Day and any of the designs would have been a great winner. We thank the school for having allowed pupils to take part but were devastated when we found out that Royal Mail had cancelled the service, just a few weeks after last year’s Northumberland Day celebrations ended.

“It was such a shame not to give our winner the credit they deserved, so we are sending them a book token prize to show our appreciation.  Hopefully, seeing their design on social media and in the press will somewhat make up for not having the stamps created.”

Lynsey Briddock, Deputy Head Teacher at Mickley First School, says: “The children really enjoyed taking part in the stamp design activity, which made them combine their knowledge of Northumberland with their artistic skills. Hopefully, if Royal Mail do a U-turn on their decision to withdraw the Smilers service, Oliver may one day see his stamp come to fruition.”

This year’s Northumberland Day education pack has other competitions to engage pupils, as well as various academic exercises and challenges.  This can be downloaded for free at www.northumberlandday.co.uk