Proud and passionate Northumbrians have already started to throw themselves into our special Northumberland Day quest – the Northumberland Flag Challenge – since the gauntlet was thrown down and people were charged with taking the red and yellow county standard out and about, to be photographed in unusual places.

The bar was set earlier this week by Loraine Oliver, who was pictured in a ryokan (traditional Japanese Inn) where the dress code is kimono.  Loraine enjoyed a fabulous dinner on what she describes as “very low” chairs served by the lady in the photo. The table was then cleared and a futon put down, so Loraine could sleep, before being awoken with a cup of green tea and breakfast. 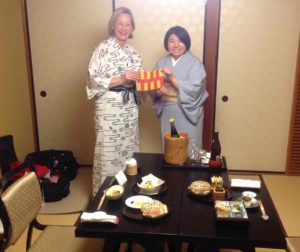 This ryokan was on a beautiful island off the coast near to Hiroshima and it certainly made an impression on Loraine, who says: “There is such a contrast between the horrors of Hiroshima and the beautiful serenity of this island, which has a sea shrine. The red shinto shrine gates are in the sea and you can walk to them at low tide and kayak through them at high tide, so it looks as if the shrine is floating.” What a fabulous place for a Northumberland flag to appear!

But our second photo was just as exciting, this featuring the owners of The Hytte at Bingfield, Sonja and Simon Gregory, proudly waving their flag whilst on a camel trek in the Atlas Mountains, close to Marrakesh.

This is just the thing we want, so please keep them coming in!